"inspires as much faith in banks as George Dubya Bush does in world peace."

"THE BANK chimes in well with the growing anti-corporatist sentiment among an increasingly politicised generation of young people... one hopes the movie will inspire a new generation of Australian filmmakers to imaginatively explore the issues that are defining our collective social reality."

"If you think the banks are bastards, you'll buy a sheaf of tickets to THE BANK, and give a few to your bank managers and his bosses so you can watch them squirm."

"Anthony Lapaglia makes Gordon Gecko look like Mother Teresa. He is every banker who has refused a loan rolled into one spluttering slimy confection. And Wenham shakes off the SEACHANGE sand to deliver a nicely understated portrait of a man on a mysterious mission. Watch out for Sibylla Budd. She has just made a major deposit on her career."

"THE BANK is one of those films that is hard to talk about without giving away its powerful secrets."

"THE BANK, a stylish thriller with a darkly comic edge."

"A great film, very exciting. See if you can guess the ending."

"a gripping David and Goliath story about greed, manipulation, morality on a cutting edge technological background. You can rest assured that you will walk out of the cinema well satisfied... There's plenty of tension and the final showdown leaves nothing to be desired. The Bank is a ripper."

"If timing really is everything the stinging satire of The Bank couldn't have arrived at a more opportune moment. A delightful streak of Australian larrikin/anti-authoritarian humour keeps it on the boil."

"Almost everyone comes out of this superior Aussie flick smelling of roses. That is, apart from the banking system. It's a film for everyone who's felt like going postal in a bank. So, that'll be all of you then." 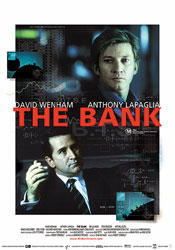