The Navigator: A Medieval Odyssey

"The wondrous (film) stands out, because it is a bold, provocative piece of cinema, rich with primitive images of earth, fire and water drawing us into a medieval world so that we enter our own century with fresh eyes"

"The Navigator is.remarkable because of its absorbing story that links medieval fears and fortunes to our times, while confirming Ward as an original talent"

"Has the visionary force and conviction of an old heroic myth... when the Wanderers arrive in the present, the film explodes into colour, and we see the modern city as if through medieval eyes - a terrifying satanic world of noise and light" 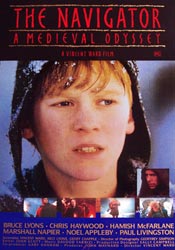